The four were selected from the national level competition as the initial stage before becoming representatives for Indonesia, Liga1PES held on February 16-17 2019. This competition previously collected 25 of the best players from Jakarta,Jawa, Sumatra Island, Kalimantan, Sulawesi, NTT and NTB .

Quoted from RevivalTV, Rizky Faidan became the most interesting. The teenager, nicknamed “The Wonder Boy”, was the youngest participant in the PES competition for several years. Rizky became a finalist several times and won the international PES competition. 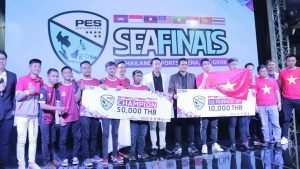 At the age of 13, Rizky has been active as a champion of the national level PES competition. Rizky has already passed the Liga1PES final round three times so that he is a representative of Indonesia, starting from the 2016 PES SEA Finals in Hanoi, Vietnam, and the first winner in PES 2018 Malaysia.

This year at the age of 15, Rizky managed to get Indonesia to win first place in the 2019 SEA Finals PES competition. In the competition which was joined by 32 players from eight countries, Rizky brought Indonesia to meet Vietnam in the final round.

RevivalTV said that previously (besides Rizky) Indonesian representatives were defeated by representatives from Vietnam and finally only left Rizky. The fight between Rizky and the Vietnamese representatives ended in penalty shootouts with numbers 4-3.

Thanks to this achievement, Rizky won a prize money of THB 50,000 or Rp.22 million. With this title, Rizky will be Indonesia’s representative for the PES championship in Tokyo Japan for the next few months.