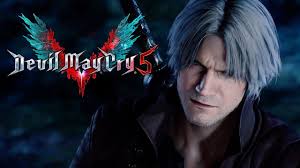 Two month ago at E3 2018, Capcom already shocked us with their new project, Devil May Cry 5. In that time, Capcom made Nero in to main character. He will be the protagonist in this game. But in the trailer, we can see player play as Dante. But Dante in this game already old, not like previous series when Dante still young.

Dante is not the NPC in this game. He also can be play by gamers ! In Gamescom 2018, Capcom released the new trailer of Devil May Cry 5 which is not Nero in the trailer, but Dante. In the newest trailer, Dante start his action from his super cool bike.

Before talking about Dante, let’s discuss about the first trailer of DMC 5. In the trailer we can see many aspect we can do with Devil Breaker, the mechanic hand of Nero made by Nico. This Devil Breaker have eight mode and have an special ability to kill the enemy.

For example, Overture. This ability can shock the enemy with electric power. Nero also can made heat into a electric shock with Gerbera. In the trailer, we can see Devil Breaker can turn into grappling hook to hook the enemy and drag them to you.

There is two other weapon which will help you kill the enemy, they are Red Queen Blade and Handgun Blue Rose.