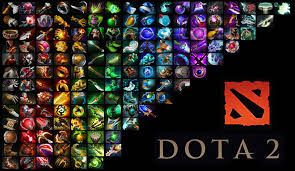 An item named Wraith Band. This item is an item commonly purchased by an agility type hero. This item provides significant additional attributes, which are 7 points for agility and 3 points for strength and intelligence. This item is also cheap enough to become an item that must be purchased during the early game. Besides this item can also be upgraded to Ring of Aquila which gives additional armor and which regen for the user.

The second item that must be purchased is Null Talisman, the same as the first item, the difference is that the larger points lie in the intelligence points. This item is suitable for INT-type heroes.

the third item named Bracer. As with the first item, the only difference in points is strength. This item is very suitable to be purchased for STR-type heroes, in addition to adding damage to STR heroes, this item also gives a fairly large HP addition at the beginning of the game.

The fourth item is called Magic Stick or Magic Wand. This item will give a charge every time there is a hero near the user who uses the skill. Each charge that is charged will give up to 15 HP and 10 SP. The maximum charge that this item can get is 17 charges.